The year was 1945, there was a man name Arturo Gallerini (Bego) and his dog (Paris) hunting in the woods of San Miniato for the mushroom nugget. It weighed 2,520 grams and was given as a gift to the thirty-fourth president of the United States of America Dwight D. Esienhower.

The story told crosses the edge of the myth seen the legendary aurea that surrounds the Truffle hunters (Tartufai). They are the keeper of natural knowledge, historical know-how and traditions, and moreover great liars! This is what the story goes:

The truffle hunter Arturo Gallerini, known as Bego, was not one who liked to go looking for truffles outside his own areas. There are those who extend their tours in different places, all around the Colline Sanminiatesi and beyond, staying away for days, or weeks. Arturo was convinced that the land where he lived was the richest of all and being very superstitious, if he had neglected it, the soil would have been indignant and would have stopped being fertile. “This soil throws out truffle, and it throws them well!”, he said. Indeed, in his lined notebook , a black cover with a red lip booklet, there are names of many places still known today: Pinocchieto, Piaggine, Doccia, Cambiati, Broto a Rosa, Rogacciaia, Macchiafonte, Vallina, Noceto and Vermana. Like a night owl, he preferred evening hunting. Doing so, he found many, and diligently wrote down all his haul of him, perhaps hoping to make his friends believe that he was right in his strategy. Scrolling through that lined notebook where he listed all the weighings, the numbers were amazing: he collected 14 or 15 kilos every month. Almost half a kilo a day! One day, Arturo went to visit the Priest of his town di lui, a certain Marabotti who knew how to combine doctrine with great common sense and for this reason he was listened to by everyone. Surely he was the most honest of them all. Arturo asked him: “How is that, Priest, that one has the right to go and pick a truffle in someone else’s private land?” And the Priest: “Res abscondita primi invenientis” which means :”A hidden thing belongs to whoever finds it first”. Then he added: “You see, Bego…the truffle is not something cultivated, it is not a fruit of the earth. It’s part of the earth!” This comparison seemed convince Arturo. After all, isn’t the truffle hunter’s job a bit similar to that of the midwife, it requires delicacy and skills when it is time to pull out. That night, the 26th of October 1954, Arturo returned home. As always the first thing was to weigh that he had found, which was really as big as a child. First, he locked the door, then he placed the hemp bag on the table. In the flickering light of the candles, the brass scales gave a golden glow. As he detached it from the wall, the rings gave their usual merry tinkling. Paris, his mongrel dog, began to hang around the table as usual as this was its way of taking part in the usual weighing operation. He put the truffle on the scale and picked up the ring. He had miscalculated the number of notches because the needle of the balance ran over the rod and returned to zero, the rod rose up and the plate containing the truffle fell back down towards the table. Go slowly, Bego! Bego, go slowly! This is truly a world truffle! Holding back the emotion, he found all the calm he needed. The truffle weighed two kilos and eighteen notches! Bego wrote it in his red-lipped black notebook which is still kept in his daughter’s house. 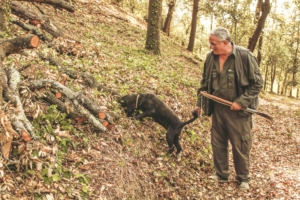