Hunt and ‘cavatura’ is named among the world intangible cultural heritage.

This recent acknowledge (16 December 2021) was a great deal for the city of San Miniato, whose late history and tradition have been strongly influenced by this practice. The reason to promote this practice is well explained by the words of the Associazione Città del Tartufo, an association that bring together the Italian cities with truffles tradition:

The candidacy considered the set of knowledge and skills that have transmitted orally for centuries in the Italian truffle territories. Today, this tradition still characterizes the rural life of whole groups of bearers, named “Tartufai”. This group of “truffle hunters” treasures a wide range of knowledge rearding climate, environment, vegetation, ground morphology. They are the custodian of skills related both to the management of natural forests and those areas where there is a spontaneous growth of the truffle plantas, as well as the training of the dog-truffle hunters, which consists in a long evolution of crossbreeds whose characteristics allow a successful hunt.

The wood is the universe where this ancient practice take place. All the alterations of the climate, the rainfall, the deforestation influence the harvest season. In this universe of subtle changes, the man and the dog are observer of this delicate ecosystem, that of the wood, where everything is connected. 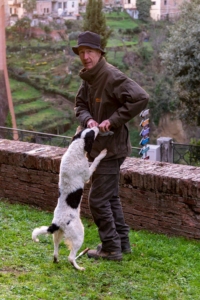