The whitish truffle of March

The whitish truffle of March

The woods surrounding San Miniato are one of the most important truffle gathering areas in Tuscany. Due to a happy combination of vegetation and geological substrate, it is known to be an interesting place for those who gather the White Truffle. But outside the season of the “White King” there are also other varieties. Among the white truffle family, there is the Bianchetto truffle (the whitish truffle latin Tuber Borchii or Tuber Albidum Pico). The scientific name refers to Count De Borch, a Polish scholar and biologist who was the first to study its botanical characteristics. A research that led him to be the first to state that truffles are mushrooms, and not tubers as was believed until then. In Italian language, it often answers to Marzuolo, a friendly denomination deriving from the month for its collection: the month of March.

WHERE AND WHEN: in Tuscany, the whitish truffle develops in the coastal area of the Pisan territory, but it can also be found in the hinterland areas where the white truffle grows. This large area includes the southern part of the Arno River, the hills of the Elsa, Egola and Era valleys around San Miniato hills. The ideal environment for the whitish truffle is a pine wood, but it can also be found along the banks of watercourses or ditches populated by willows and poplars, as well as in avenues lined with lime trees. The ideal soil is sandy or composed of very fine organic material. Even calcareous, clayey soils, with the presence of silica, are suitable for its growth. The ripening time goes from the first half of January to the first half of April.

HOW IT APPEARS: the whitish truffle is characterized by a whitish rind and a brownish, almost purplish pulp. Its aroma is penetrating and persistent, a little garlicky and spicy but still very pleasant. Its dimensions are generally very small and often do not exceed that of an egg. Its shape depends on the nature of the ground: if the ground is soft then it will grow rounded; on the contrary, if it is compact, the mushroom will have to struggle to make room for itslef, and will become lumpy and gnarled. Smaller in size than the White truffle, it can weigh from 30 to 200 grams. 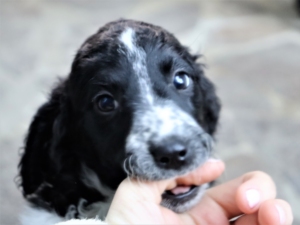 For truffle hunters it is a very interesting mushroom, because it is the first one to turn to for training dogs, because the withish truffle grow in large groups and close to the surface. The truffle dog’s cub begin their training and play with this spring whitish truflle.